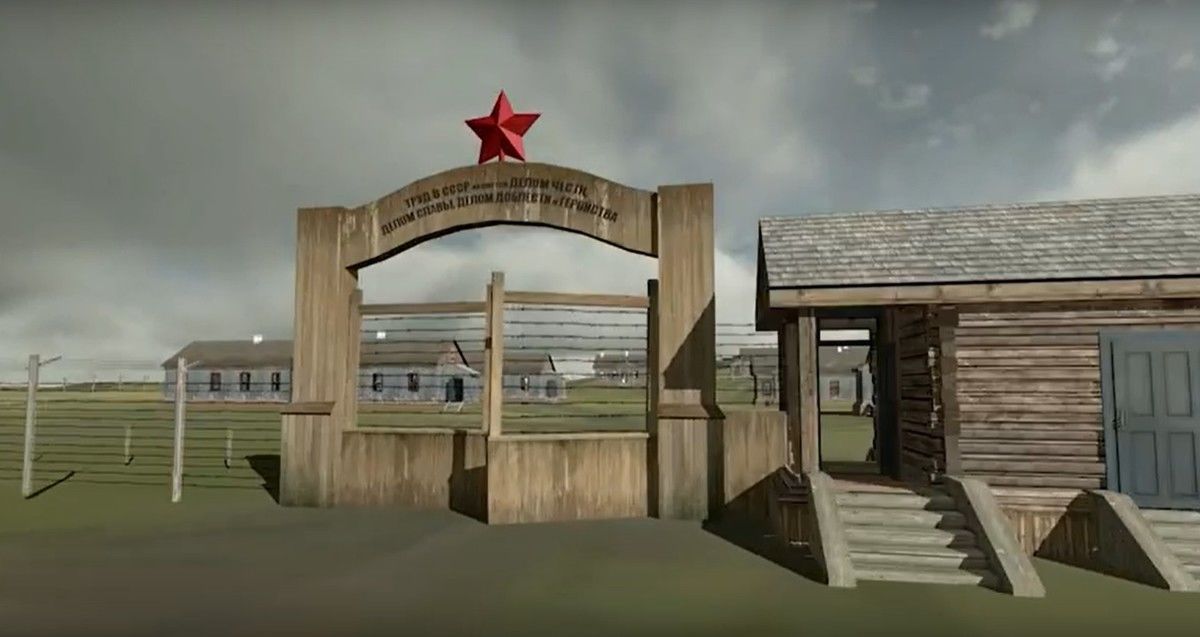 Today saw the ceremonial launch of the Gulag Online virtual museum. The virtual museum is the result of a year’s work by members and associates of the Czech NGO Gulag.cz in cooperation with the Institute for the Study of Totalitarian Regimes. It is the world’s first comprehensive project of its kind, linking archaeological and archival research, oral history and geographical data, as well as the latest information technology. The virtual museum is accessible at the website www.gulag.online in Czech, English and Russian.

The creation of the museum itself was preceded by a number of Czech expeditions mapping the remnants of Gulag camps around the “Dead Road”, a railway built in the 1950s between the cities of Salekhard and Igarka in Siberia. “We set off on our first expedition out of curiosity, to find out whether anything of the former labour camps in these remote territories had been preserved. When we found out that it had, we decided to try to map those places professionally. That’s also when the idea was born to make the results of our work accessible in the form of a virtual museum,” says the chairman of the Gulag.cz association, Štěpán Černoušek. “We surveyed and documented in detail the remnants of individual camps and, with the help of historical photographs found in the Russian archives, reconstructed them in 3D. The form in which they can be seen at the Gulag Online virtual museum corresponds with the greatest accuracy possible to the form of camps at the start of the 1950s, including the smallest details of individual mapped buildings,” he adds.

But this is by no means all. The Gulag Online virtual museum represents a comprehensive popularising and teaching aid by means of which broad information can be acquired on the workings of the Soviet system of repression. Individual tours are complemented by the life stories of persecuted Czechoslovaks in selected documents and photographs gathered by Institute for the Study of Totalitarian Regimes’ staff as part of the project Czechoslovaks in the Gulag. The life stories of those people are shown in the Gulag Online museum by means of story maps that also make it possible to trace a person’s whole story on a moving map. “From the Bolshevik revolution in 1917 to the end of the 1960s, approximately 25,000 Czechoslovak citizens and members of the Czechoslovak minorities living in the USSR were persecuted in the Soviet Union. However, to this day the tragic stories of most of them remain utterly unknown, not only to the public but even to their own families. This was the main impetus to the launch of our research in 2008,” says Jan Dvořák, an historian with the Institute for the Study of Totalitarian Regimes.

Other maps created for the purposes of the Gulag Online virtual museum offer previously unprecedented views of a remote part of Siberia where the remains of individual labour camps can still be found. Users can switch between satellite images, topographic maps and a layer of documented camps and railways. “Through the use of the possibilities offered by geographic information systems (GIS), we were also able to create a detailed digital map of the Dead Road that contains not just processed scans of military maps from the 1970s and 1980s (a total of 44 map sheets covering the entire length of the Dead Road, meaning nearly 1,200 km), but also specially purchased satellite maps showing the remains of several camps that are not visible on commonly available satellite images,” says Radek Světlík, the Gulag Online’s maps expert.

The Gulag Online museum also contains panoramic photographs capturing the current form of the labour camps, as well as 3D models of objects such as items of daily usage, diaries, personal correspondence and period photographs of prisoners from the investigation files of the Soviet secret police the NKVD. Individual objects were found directly among the remnants of former labour camps or provided to the Gulag Online museum by the family members of Czech victims of Soviet repression. “With the application itself we have tried from the very start to construct it differently from a mere encyclopaedia full of dryly structured data. All the elements of the museum are mutually connected and users can navigate intuitively between 3D graphics, maps, panoramic photographs and individual informational texts. They can then focus on the subjects that most interest them personally,” explains Jan Vrátný, programmer and graphic designer of the Gulag Online museum.

The Gulag Online virtual museum employs Web GL technology. This allows all of the 3D animation it contains to run on the web interface of an ordinary browser, without the necessity of installing external programmes or other add-ons. This method of representing 3D technology is still in the experimental stage internationally and the Gulag Online virtual museum is one of the first projects to have the opportunity to employ the technology in a complex manner. “On one hand we considered connection speed and ease of display as regards users, on the other the quality of the graphics. Of course, the user can’t expect graphics of PC-game standard. The entire 3D application has just 15 MB, which allows for sufficiently easy and at the same time high-quality display on a regular web browser,” says Josef Brošta, who developed the virtual museum’s 3D graphics.

The current form of the Gulag Online virtual museum is not final. More data will gradually be added to the museum (archival satellite images, the results of planned expeditions, the stories of survivors from other states), while different language versions will also be created. However, the museum does now have firm foundations on which to build. “Just optimising the 3D graphics and the visualisation of a camp in this form took our programmers and graphic designers hundreds of hours, and they spent hundreds more hours reconstructing the actual camp and developing the database system on which the entire museum operates,” says Štěpán Černoušek. “We also can’t forget the other people who contributed to the development of the museum, be they translators or the historians who worked on the stories of individual survivors for us. I’d like to thank them all very much for their excellent work.”

Information for the media

Gulag Online is a project of the Gulag.cz association, whose activities include mapping and documenting abandoned camps in the former USSR. It‘s partner is the Institute for the Study of Totalitarian Regimes, which as part of its research has since 2008 been mapping the fates of Czechoslovak citizens persecuted in the USSR. The establishment of the museum has been financed by the support of the public on the Hithit website and the Vodafone Foundation’s Technology for the Future programme.

The organisation Gulag.cz is concerned with the phenomenon of the Gulag prison system and the Soviet totalitarian regime in general. Founded at the end of 2009, its mission is to share and circulate information about the Soviet Gulag and everything connected with it, including its links to Czechoslovakia and other countries. The organisation’s work facilitates the exploration of the Gulag and the totalitarian regime in the USSR in the broader context. It brings together research work, archeological and archival research, the use of new IT technologies, educational methods and other perspectives from a wide variety of fields and disciplines. It cooperates with other organizations, including Russian ones (e.g., the Memorial association), in its own activities and the development of further projects.