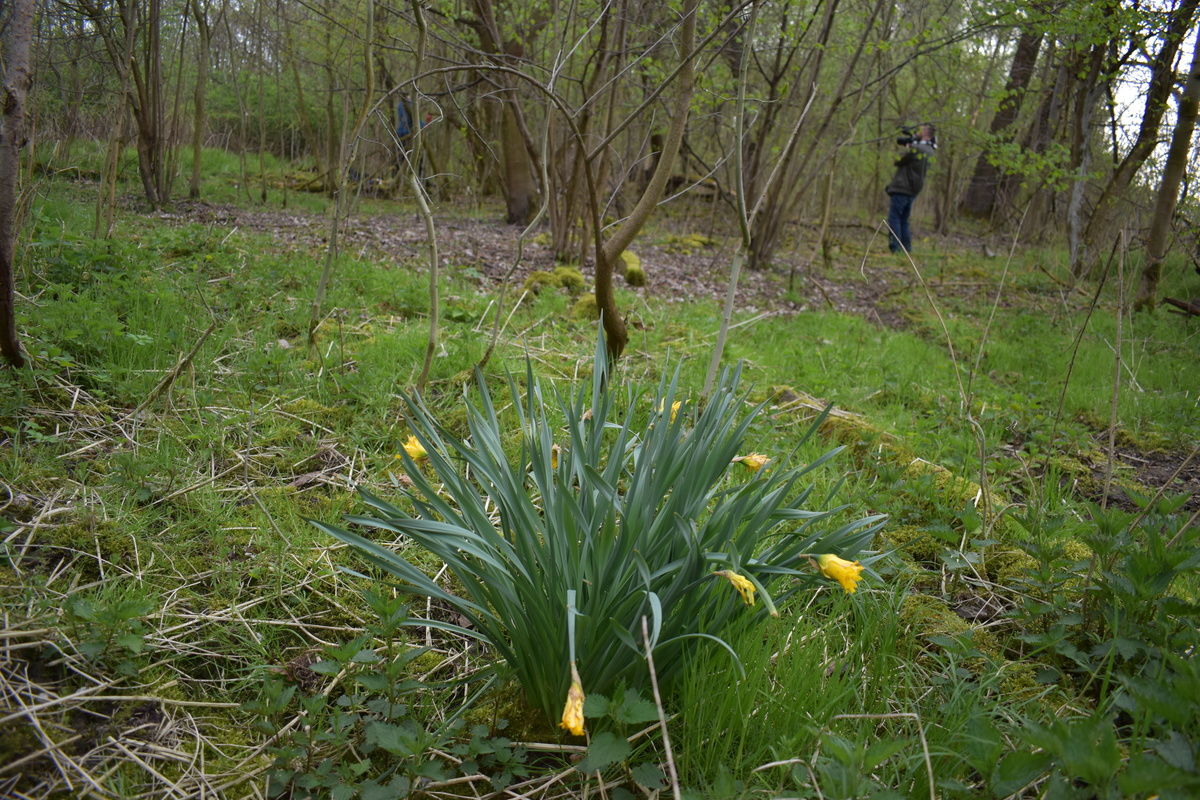 The camp was established after the fall of Mussolini’s regime in a former sand pit on the street Na Cihelně. About one thousand forced labourers from Italy lived there and worked in the mines. In September 1944, based on Hitler’s direct order, they received the status of civilian labourers, but they had to sign a document in which they pledged to continue doing this work until the end of the war.

They were held separately from other prisoners on the territory of Karviná so that they could not pass them information about the developments on the front line. The camp officially closed down in March 1945; however, some former prisoners remained there and were taken care of by locals (allegedly also as a protection against the Red Army). After the war, expelled Germans were interned in the camp, while under the communist regime a technical auxiliary battalion was located there. After that, a hen farm was established there, which was later pulled down or disintegrated due to mining. At first sight, no remains of the camp are visible. And yet it is the best preserved of the four camps in Karviná. 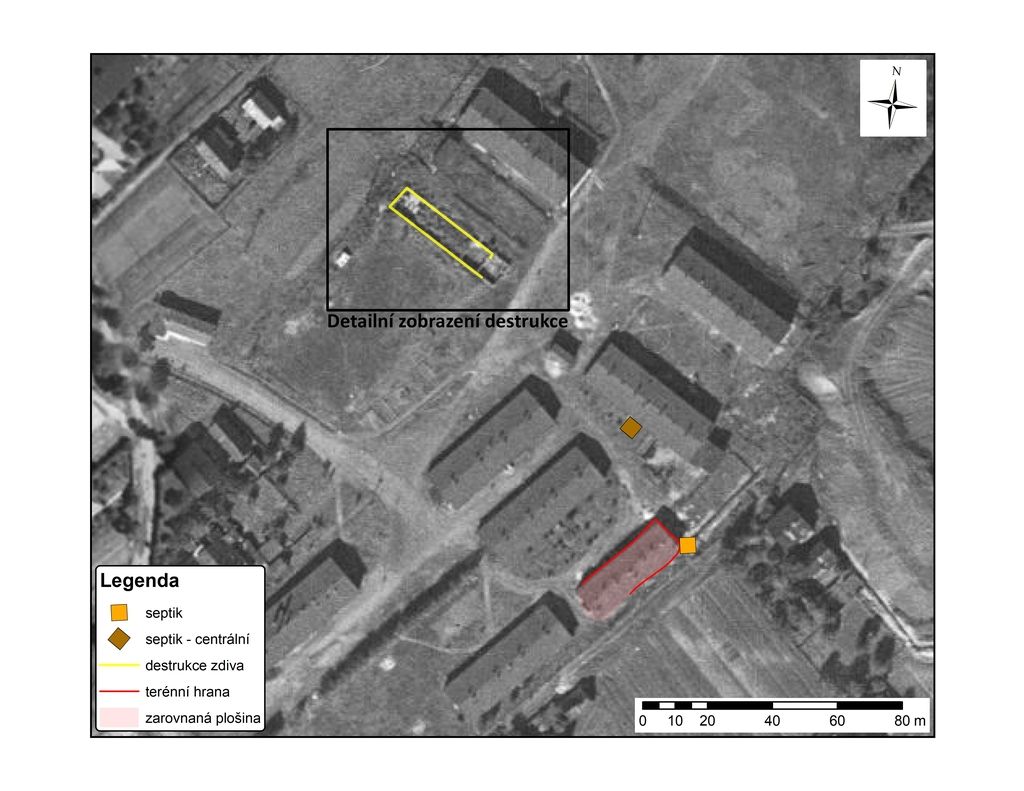 We were able to carry out detailed measurements there using a total station thanks to the still preserved remains of the peripheral walls of one of the barracks which are also recognizable in the historical orthophotographs. This allowed us to match the terrain relics with structures in the historical orthophotomaps (the trigonometric net could not be used due to prominent deformations in the landscape caused by mining). We were able to identify a door to a room. Other, wider measurements indicate there was a gate or an entrance. Internal partition of the structure to individual rooms or an extension is evidenced by a still visible joint, which is always the weakest part of any construction, so the masonry was most severely damaged there. When comparing the results of the measuring and the historical orthophotograph, it is clear that the position of the joint is directly adjacent to a wall, although the wall is no longer visible in the terrain.

A panoramic photograph of the remains of barracks: 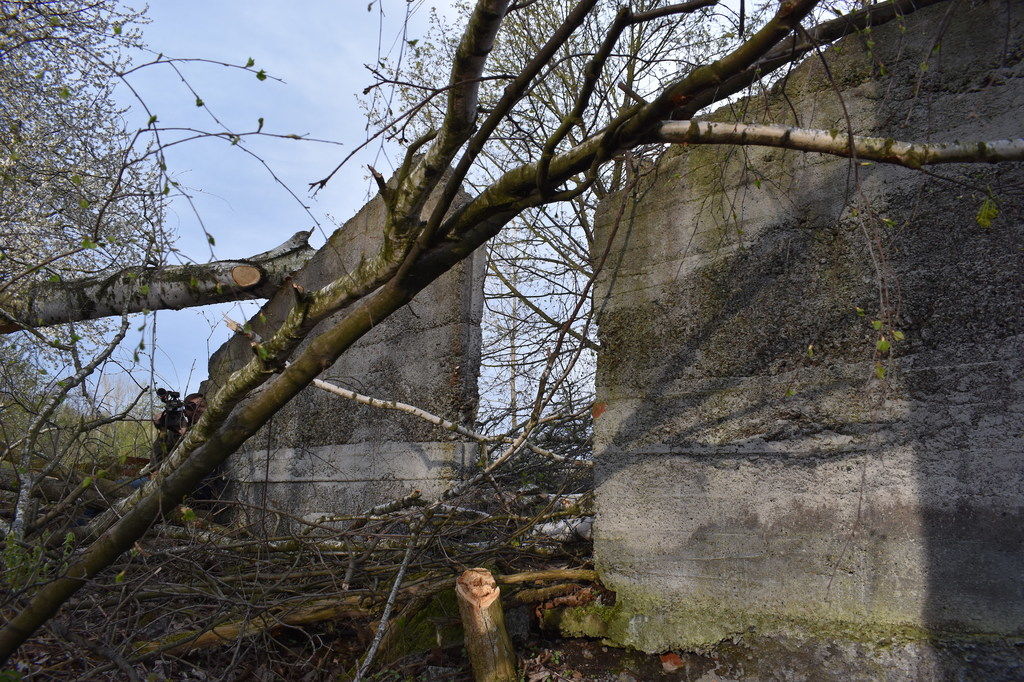 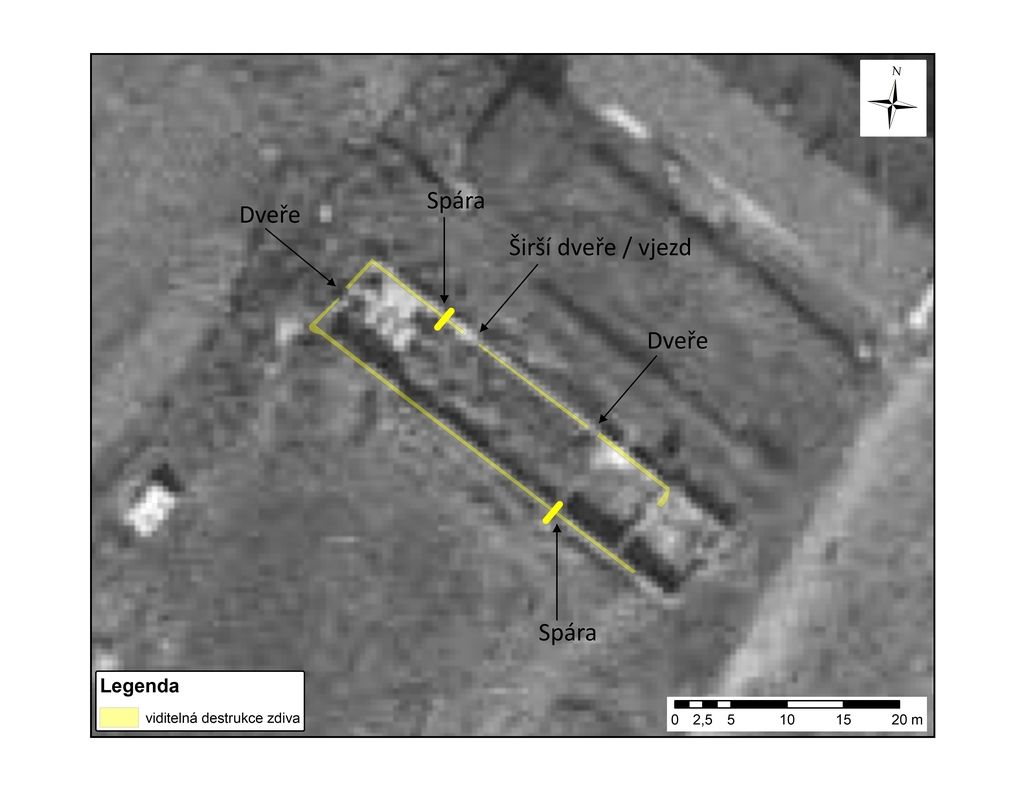 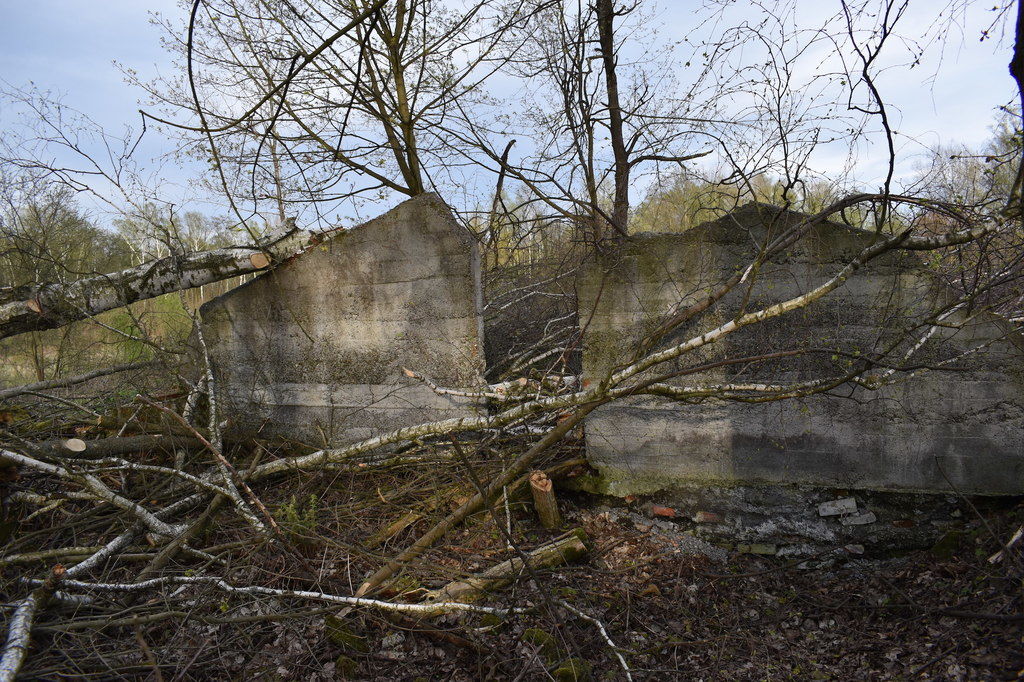 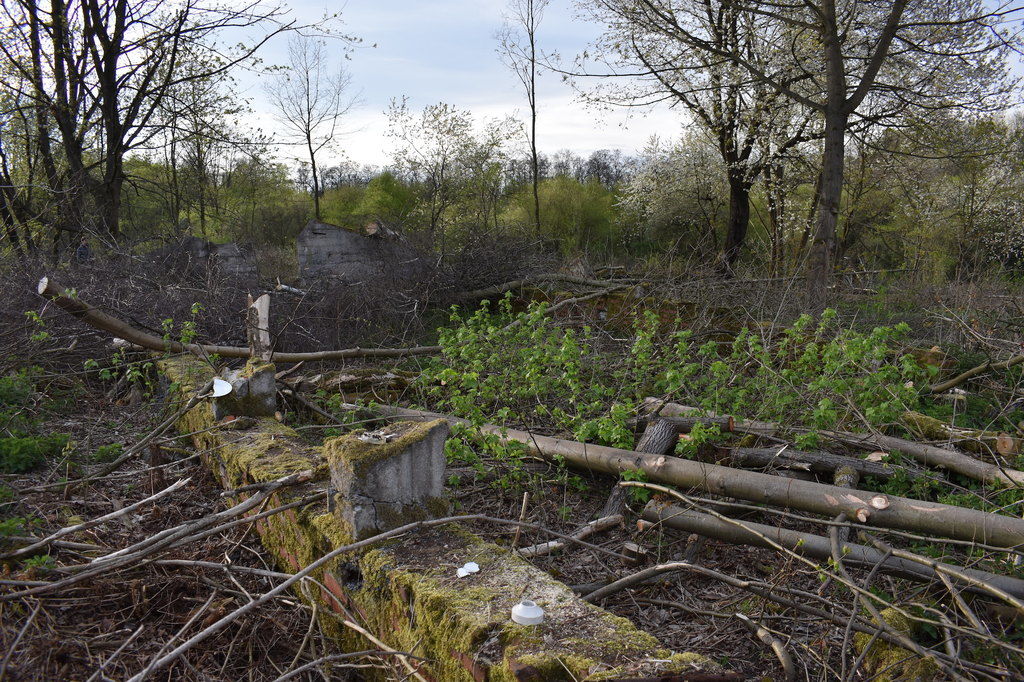 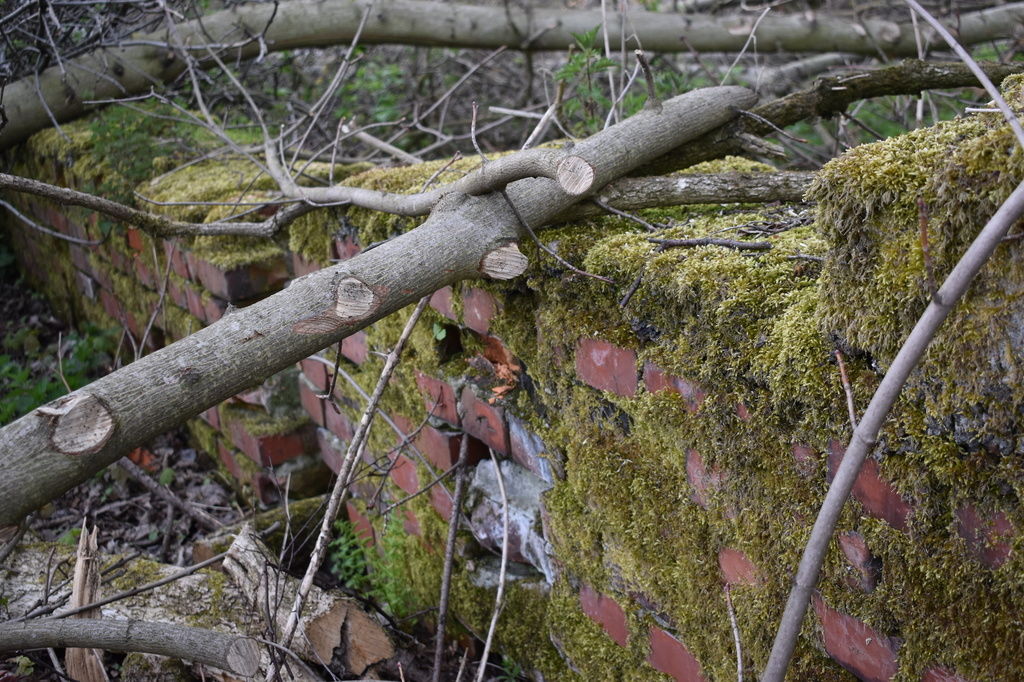 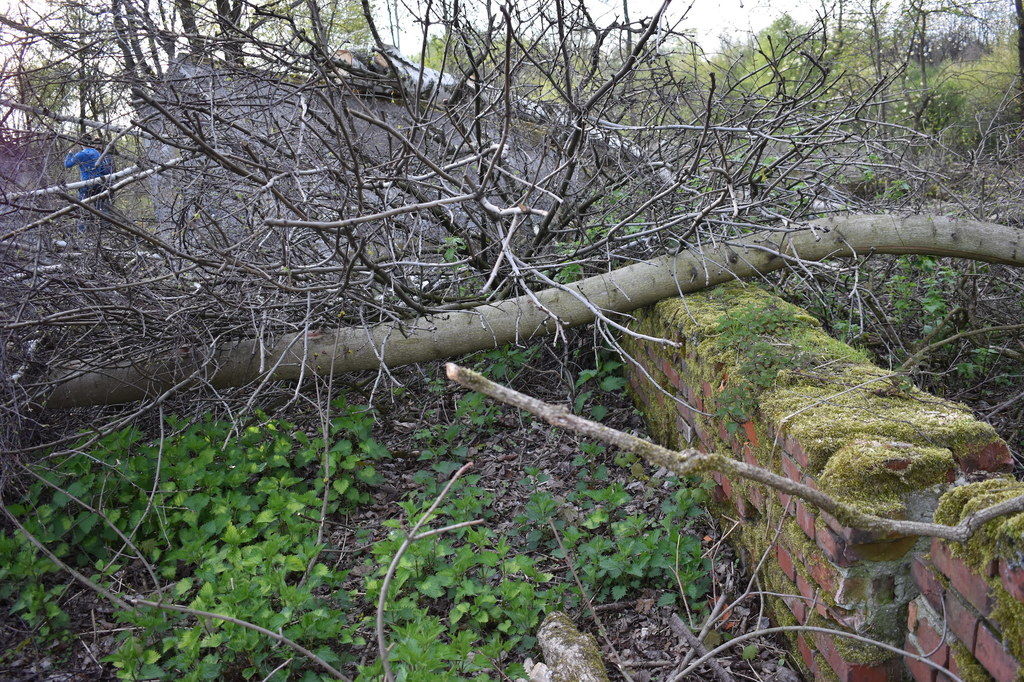 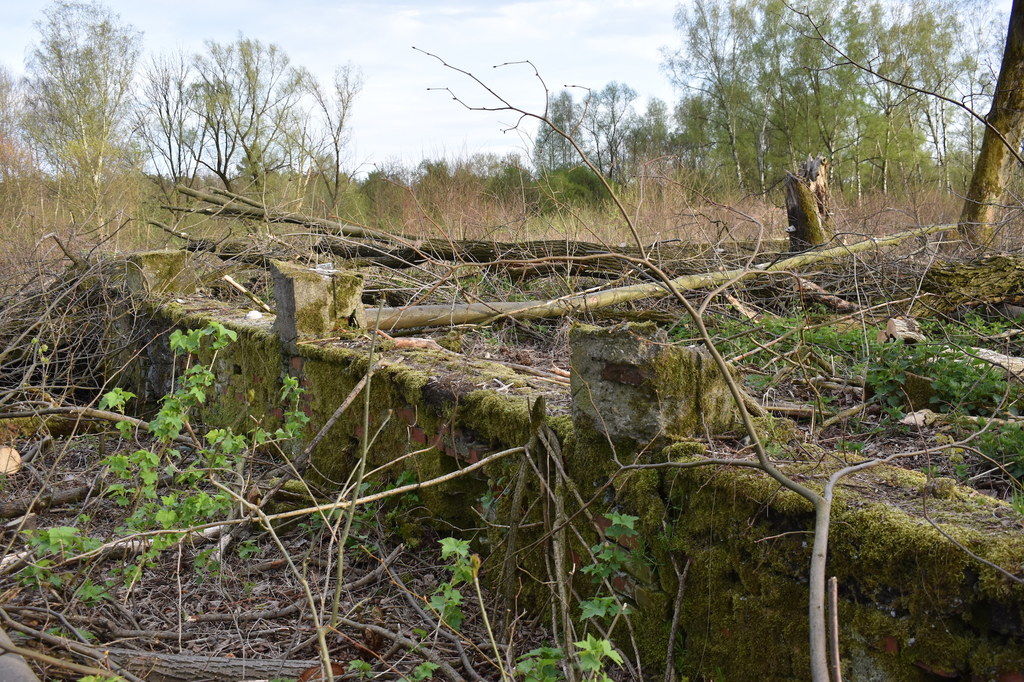 In addition to this destruction, we discovered the remains of another barrack in the camp. In the terrain, it demonstrated itself as a large flat plateau with a slight depression in the centre. We measured the raised, rectangular perimeter edge with a total station – it fully corresponds with the structure in the historical orthophotograph, also its orientation fits perfectly – consequently, we have identified this relic as this structure with great certainty. In addition, we found a concrete cesspool at the corner in the eastern part, in front of the gable part of the structure. We found an identical disposition in the Soviet camp – in this way, we realized this was an interesting “identifier” of prison barracks, even if they are not visible in the terrain, or are only indistinct. The cesspool was not filled with anything and it was about 1.8 m deep. At the bottom, a head of a doll of unknown age and three holes into the piping – possibly the camp’s sewerage – were found. One of them led to a much larger cesspool that was 40 m away. It was located next to another barrack which, however, is not visible in the terrain. The whole northern part of the camp is in a terrain depression. We found no more relics there. 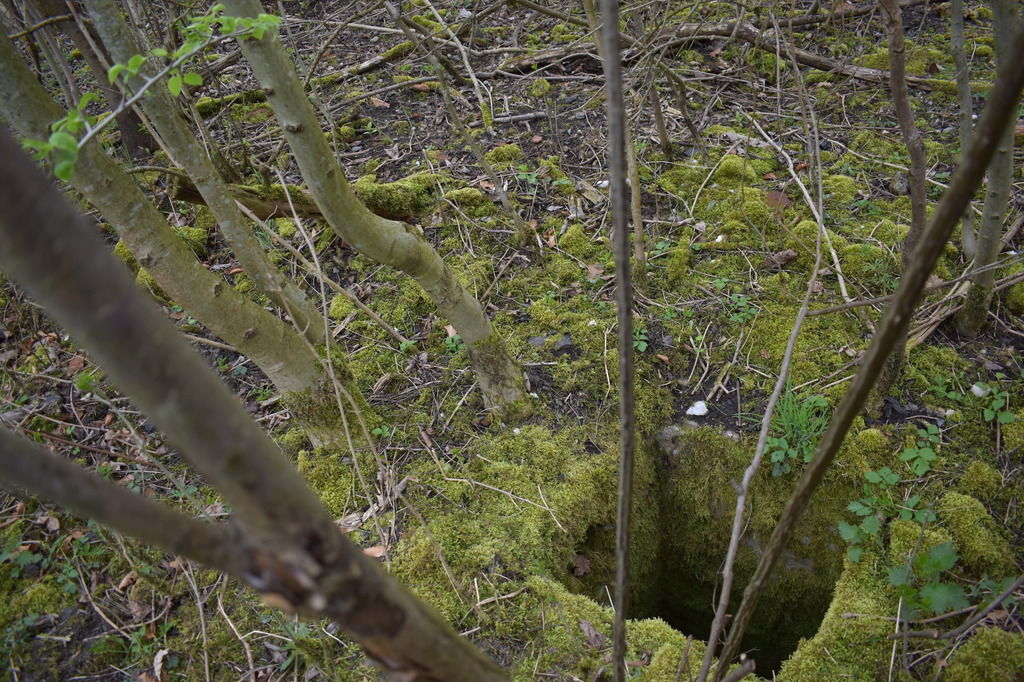 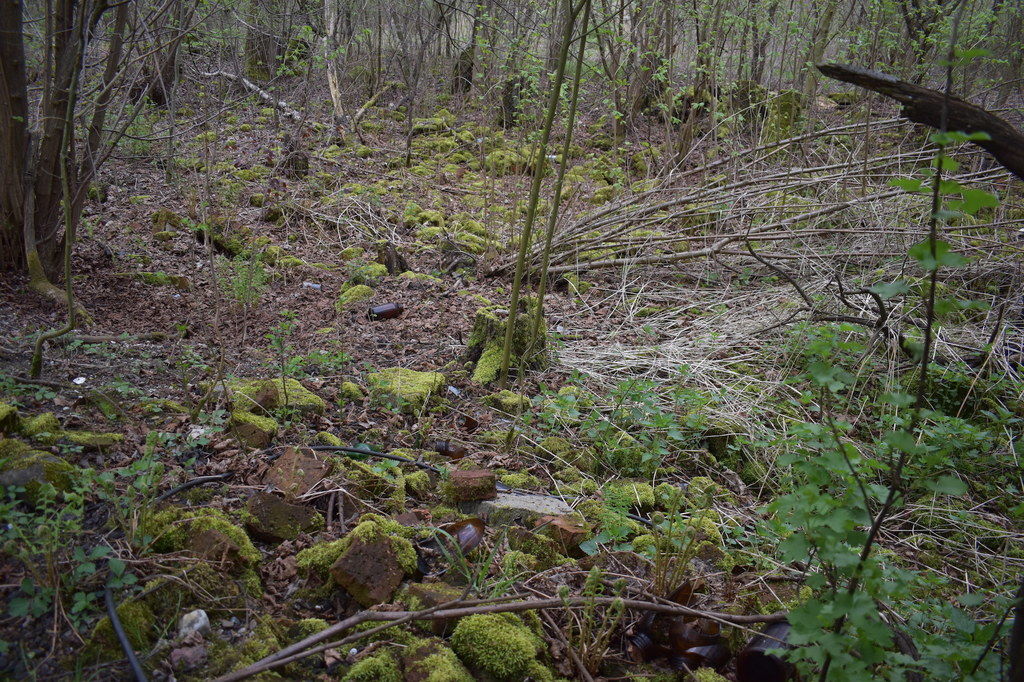 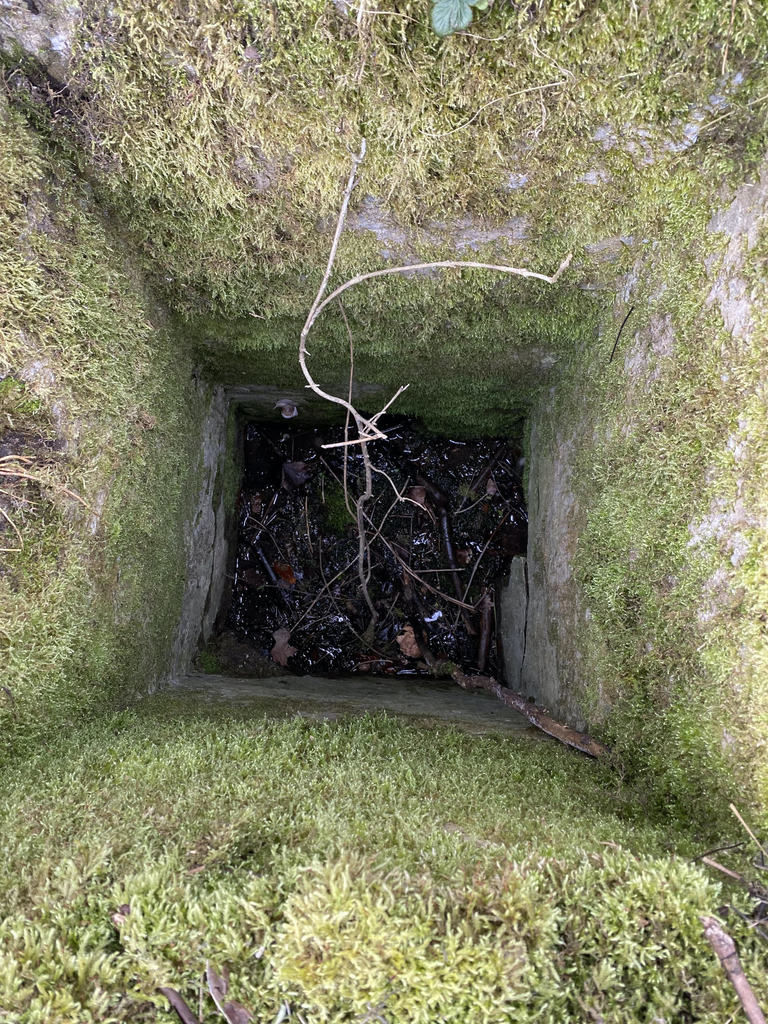 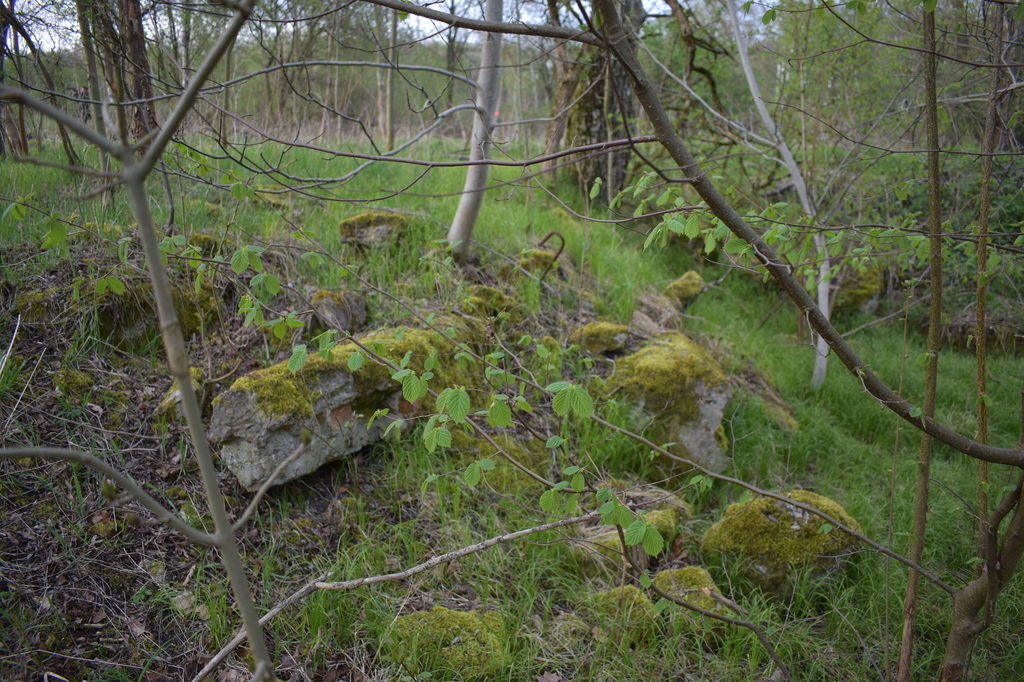 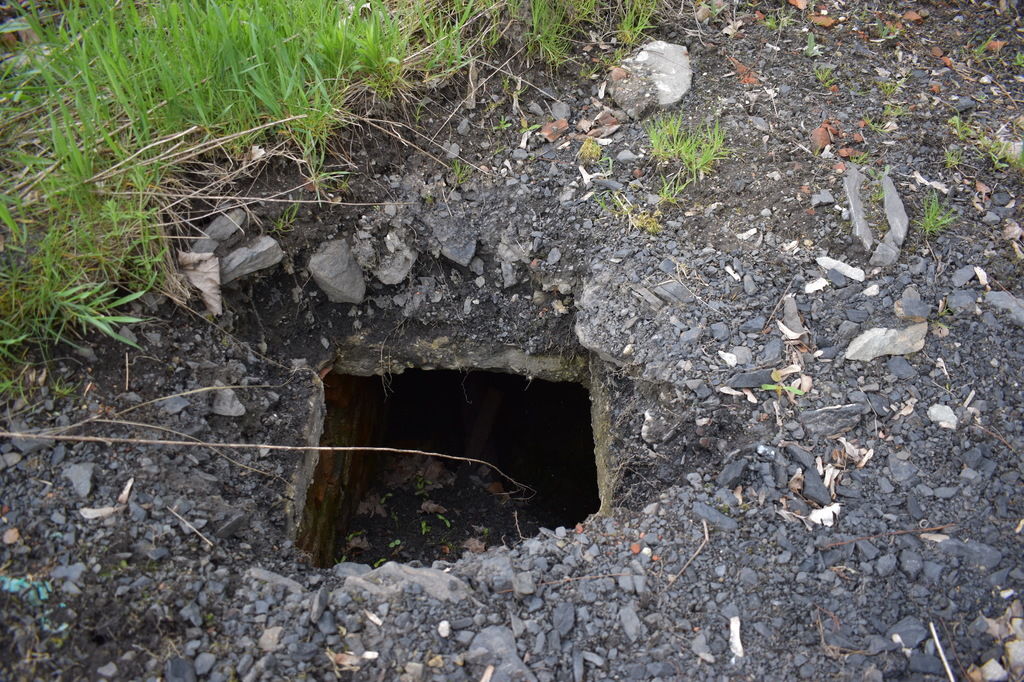 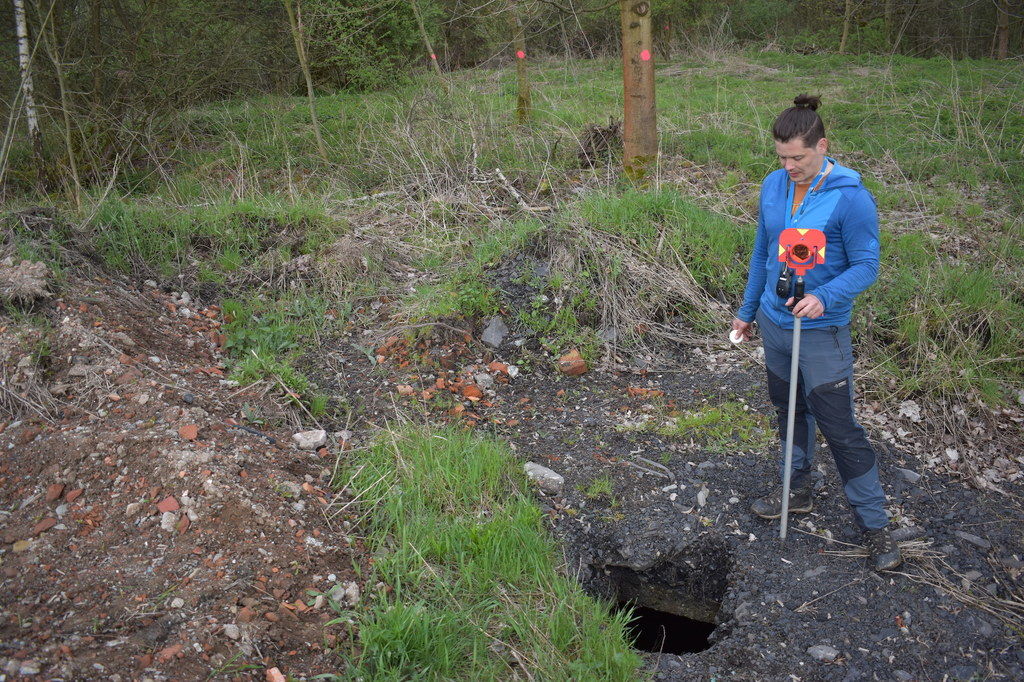 Massive illegal felling occurred on the site of the camp and huge parts of the camp have recently been covered in rubble, possibly from torn down buildings. The last remains of the camp are thus being destroyed. 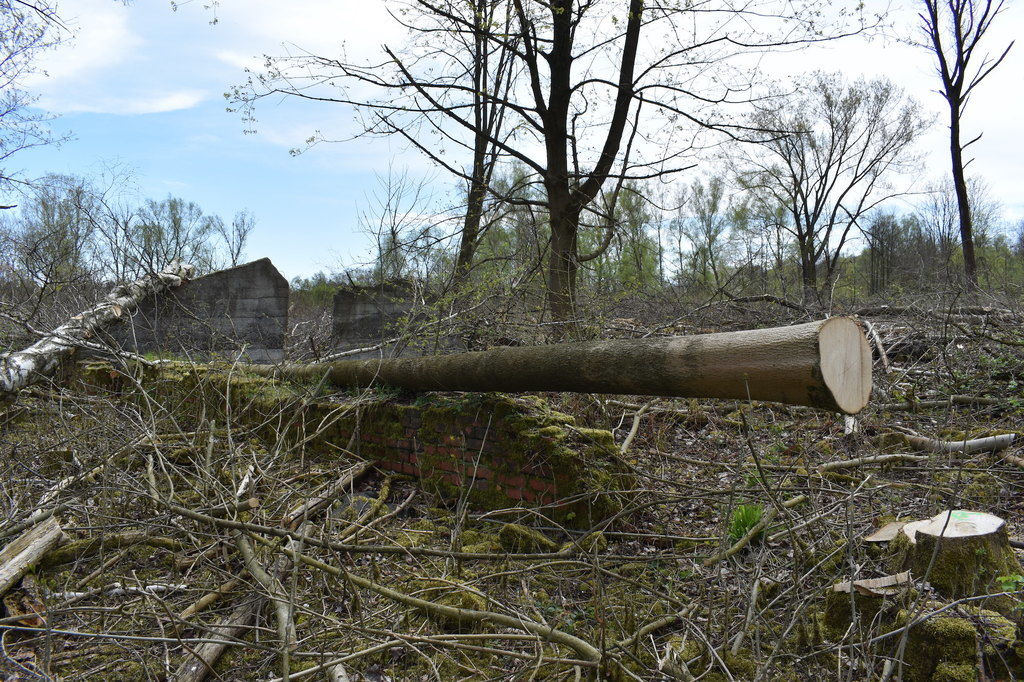 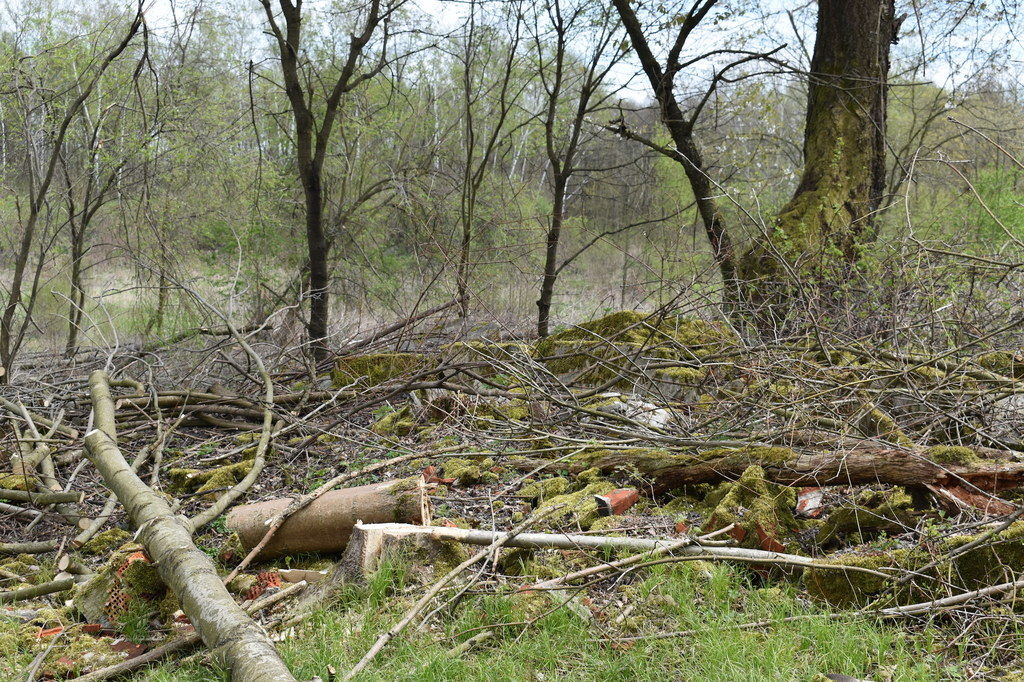 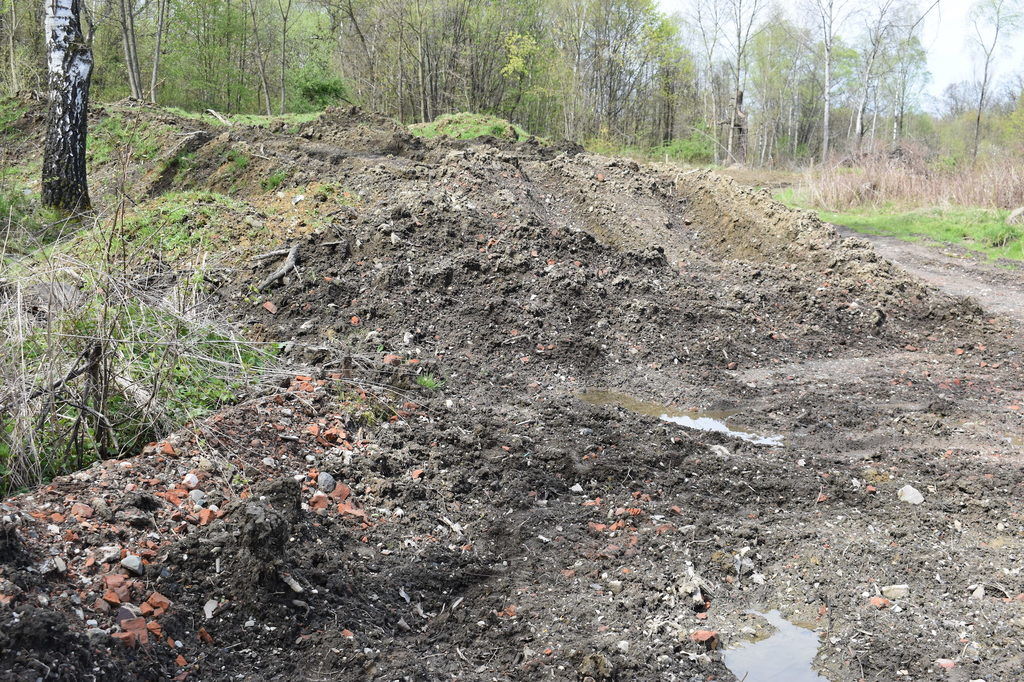 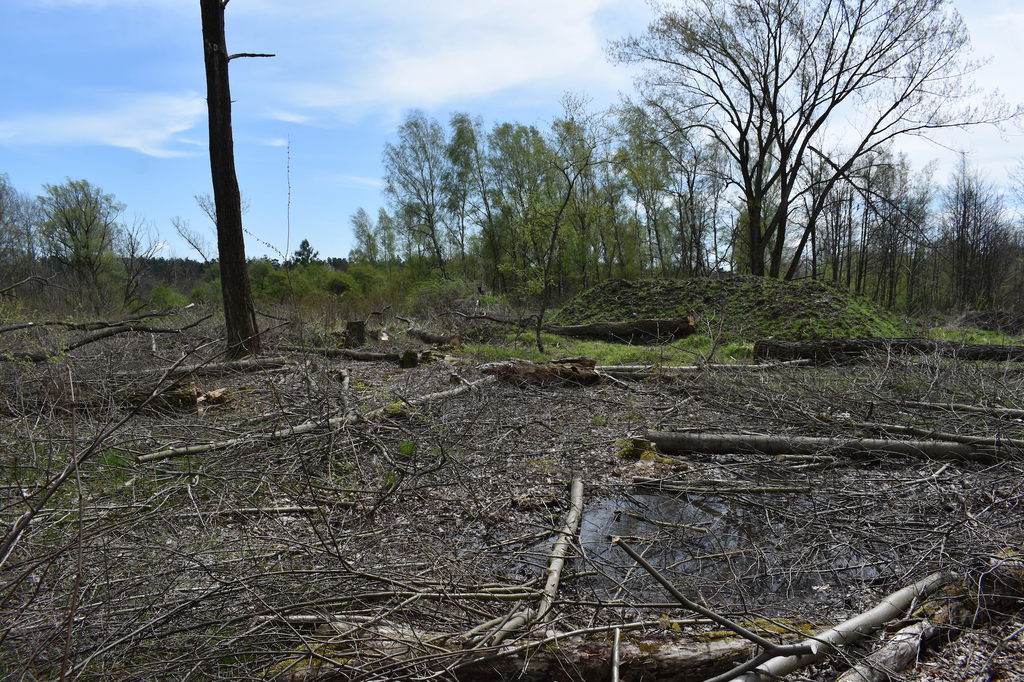 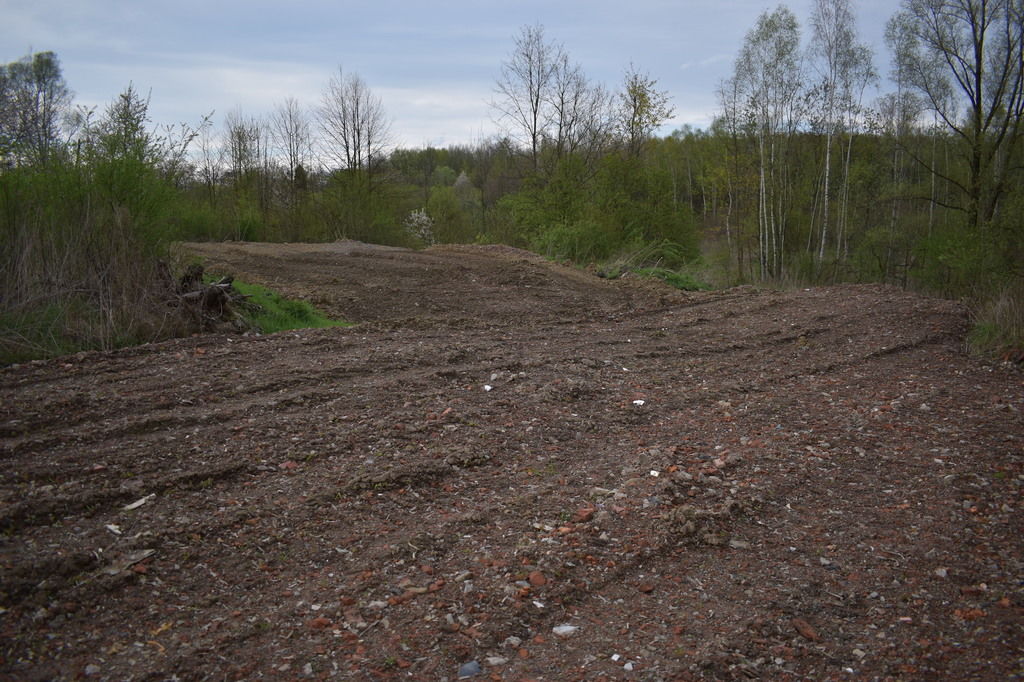 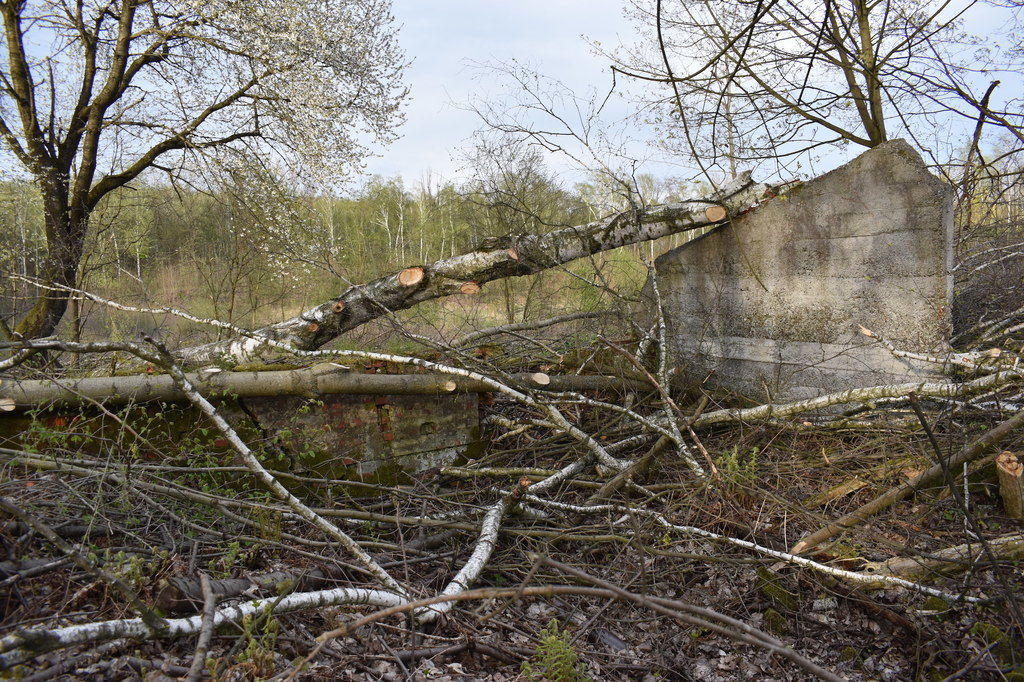 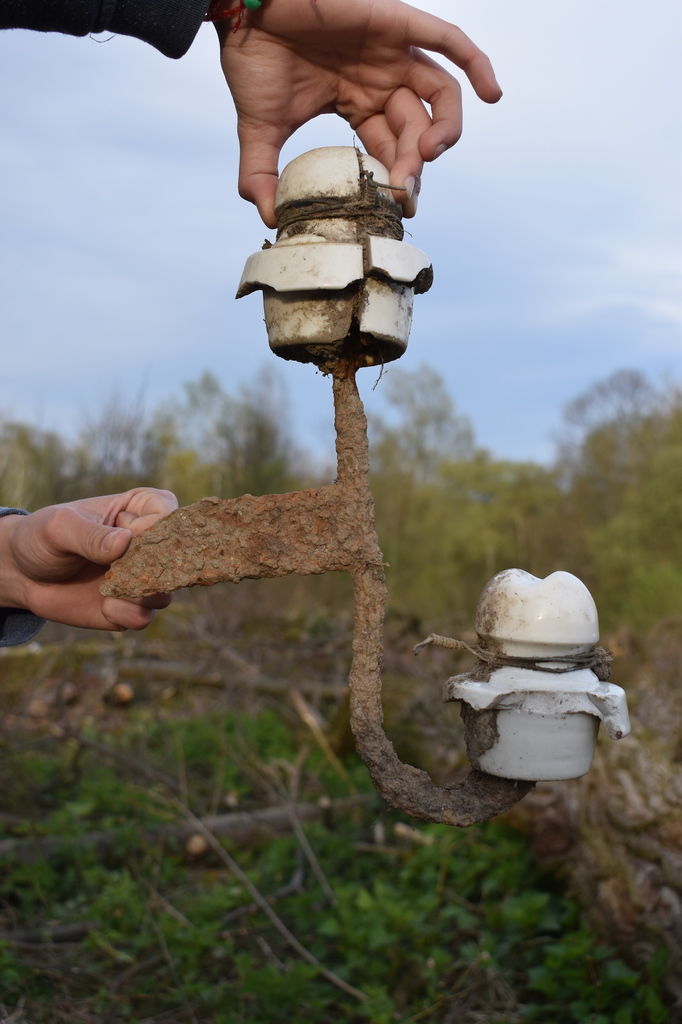