We have mapped another part of the Marble Gorge camp in the form of a panoramic tour of the adjacent uranium mine. The tour was created by Radek Světlík during an expedition in August 2016.

The uranium mine’s support facilities are located at the very end of a valley on a large, flattened out heap that protrudes from an almost vertical wall of rocks. The original path upwards from the prisoners’ camp below is now buried and access across the rubble is very difficult. The spot with the best view of the entire valley and the camp complex below is marked on the edge of the heap with a cross bearing the words “Modern Russian martyrs” (Новомученикам российским) in memory of the prisoners who suffered terribly here doing dangerous work in extreme conditions daily. Following the closure of the mine, all valuable equipment and machinery was hauled away. Nevertheless, a great number of items and noteworthy buildings have been preserved.

The biggest building is a substation, which is more or less in the middle of the complex and is surrounded by barbed wire. Around massive structures on which transformers were located there are four high columns ending in long iron bars – improvised lightning rods – in the corners. Near the substation lie the extensive ruins of several large buildings (perhaps workshops?), while on the very edge of the heap is the only slightly well preserved latrine in the whole complex.

3D model of a wheelbarrow created with photogrammetry:

Wheelbarrow by Gulag.cz on Sketchfab

Across the entire knoll runs a wooden path on which prisoners transported extracted materials in wheelbarrows. One stands intact on the path, as if it had been abandoned yesterday. At exposed spots there are planed boards patched up with bits of iron plate. The path, which begins beneath the mouth of the galleries, which are several metres higher than the complex, runs past the substation and a couple of small buildings as far as the western edge of the heap. There lies the torso of a shoot that was used to transport material down to the valley for sorting and processing. Parts of the shoot lie throughout around the rest of the valley, carried by thawing snow or rock slides.

Right by the shoot there is another interesting building: a vertical lift shaft via which mining carts of material were transported directly to it. There were evidently a number of such shafts at Marble Gorge, though they were apparently all blown up when the mine was closed. There is also a small structure here – a compressor building – in front of which lie a massive engine cooler and part of a compressor.

Unlike the buildings in the valley below – in particular the prisoners’ camp and buildings on the sides of the valley – the mine’s support facilities have barely been buried at all, meaning the number of items that to date have not yet been buried forever is quite large. Among the items left behind at various spots by previous visitors include all kinds of parts of tools and tools, machine parts and many other fragments of unclear provenance. Parts of mine lamps and respirators lie in piles here and there. In one box we even found a rubber mouthpiece for a respirator – one of the few non-mental artifacts. 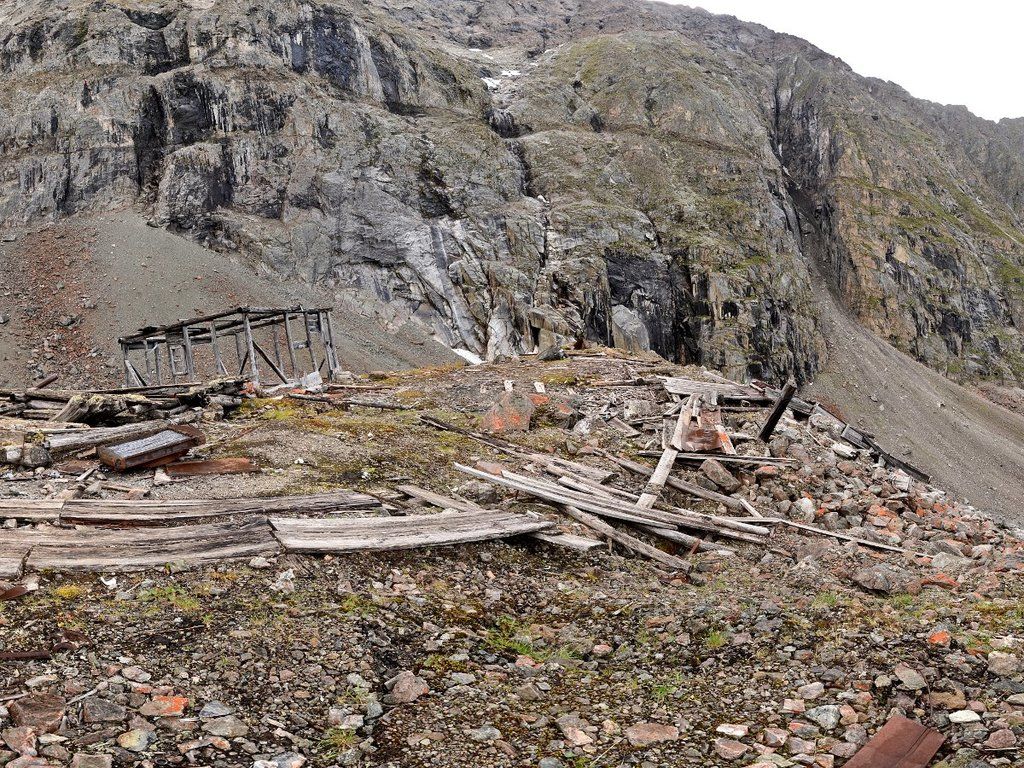 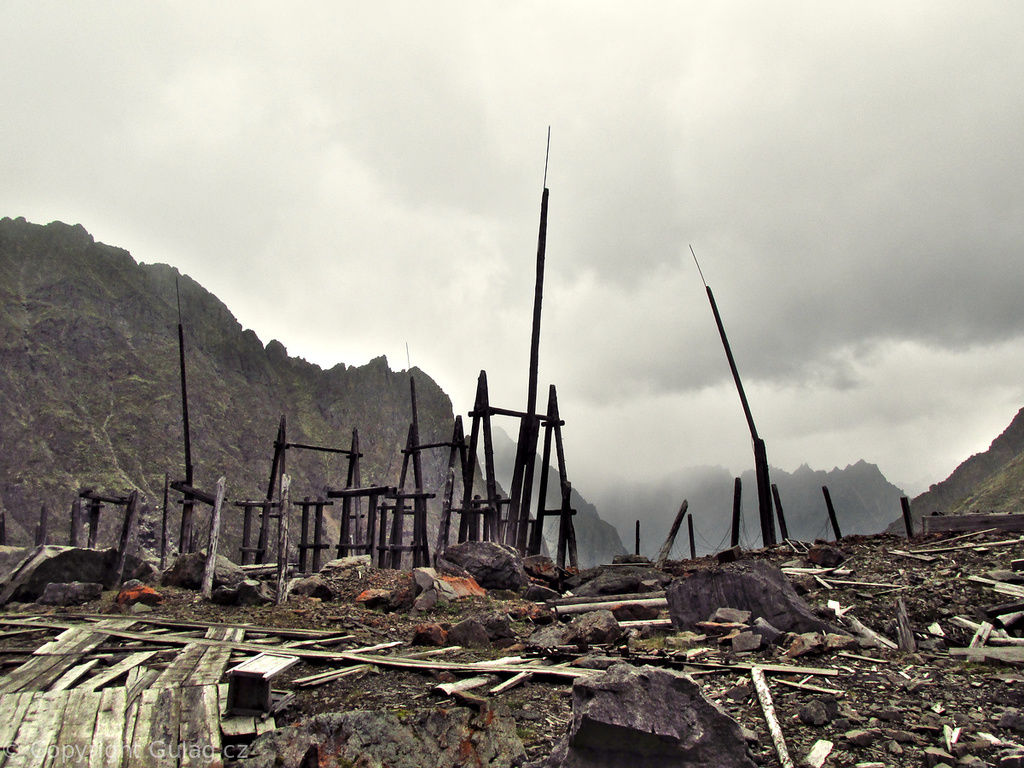 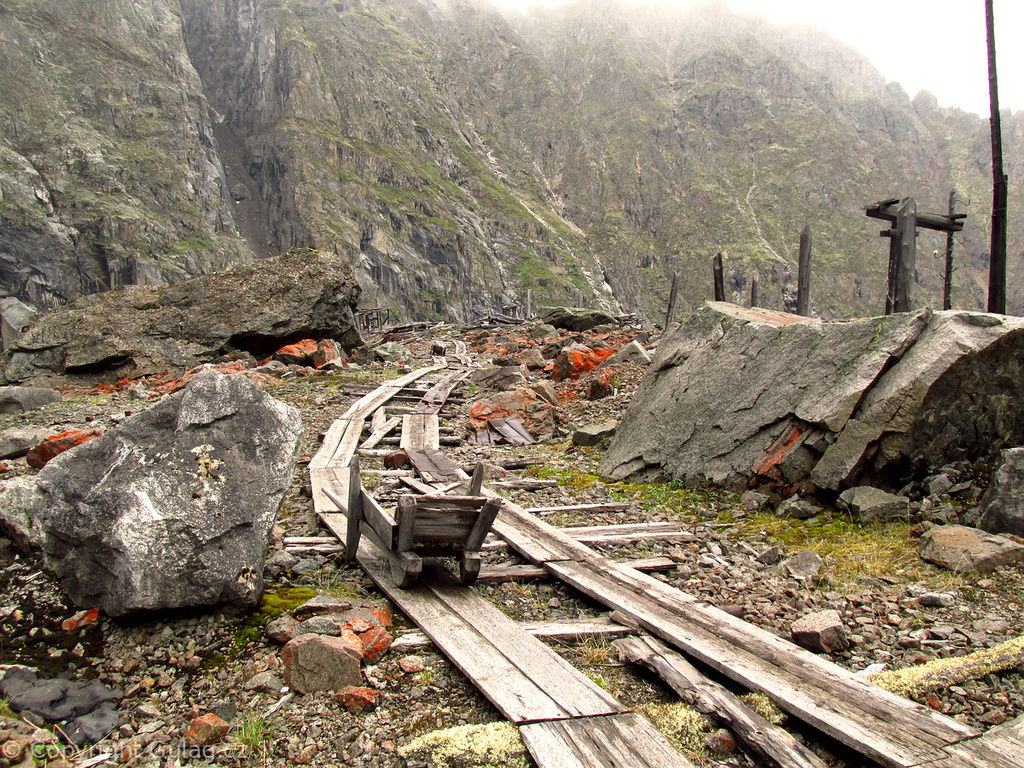 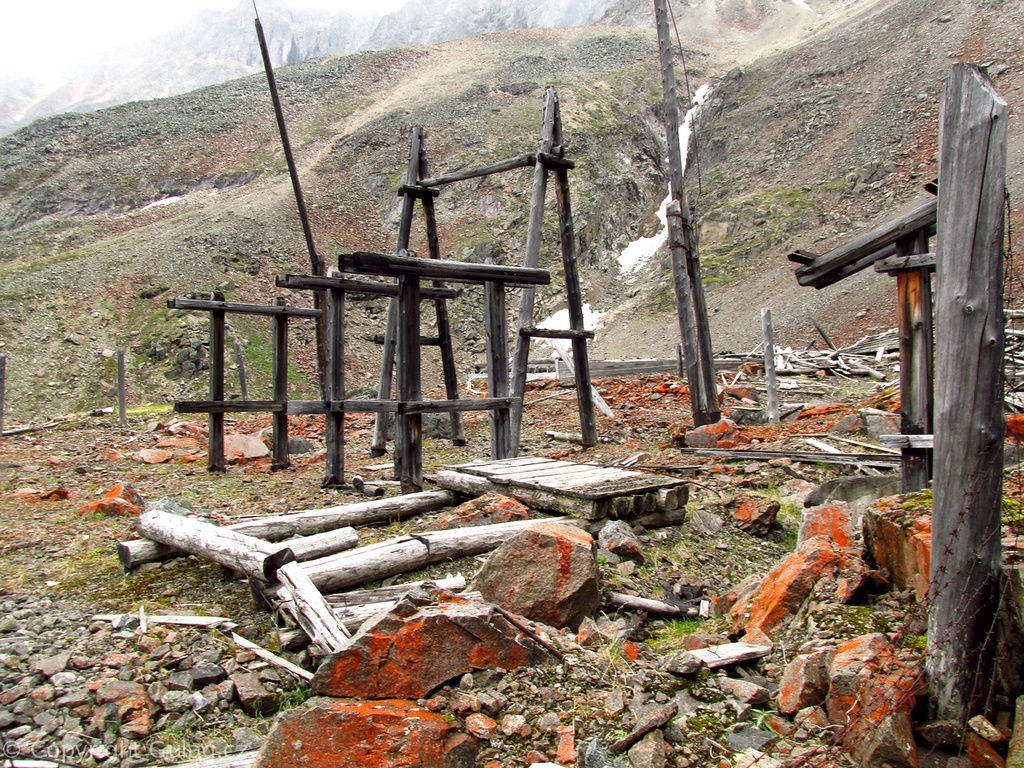 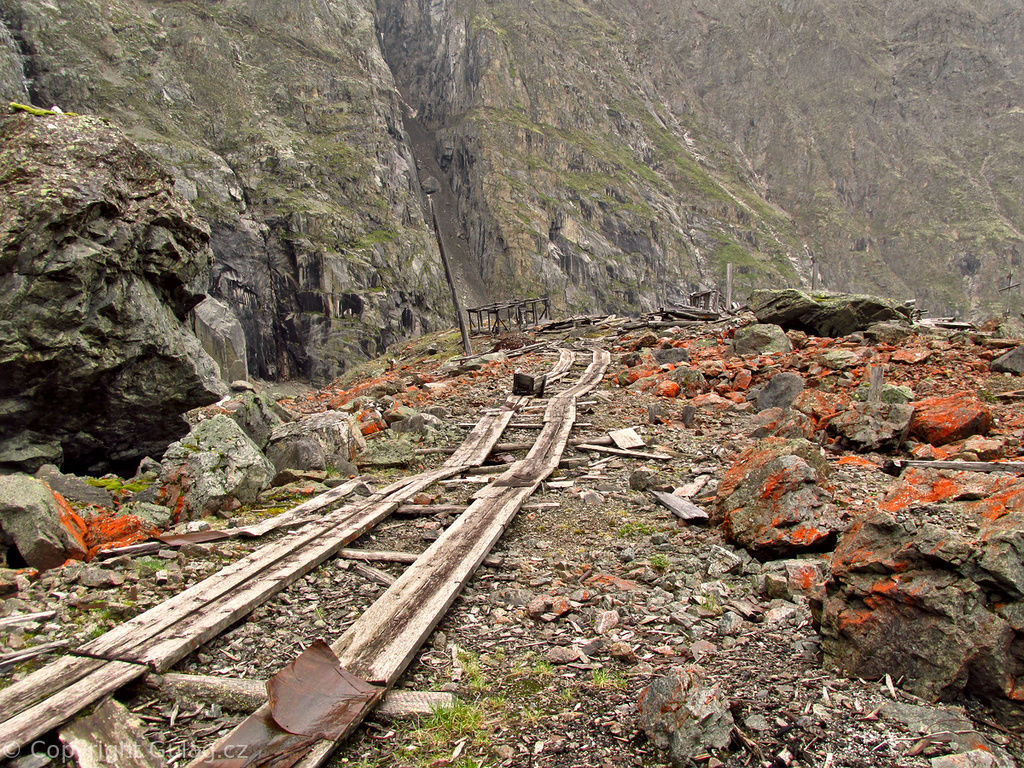 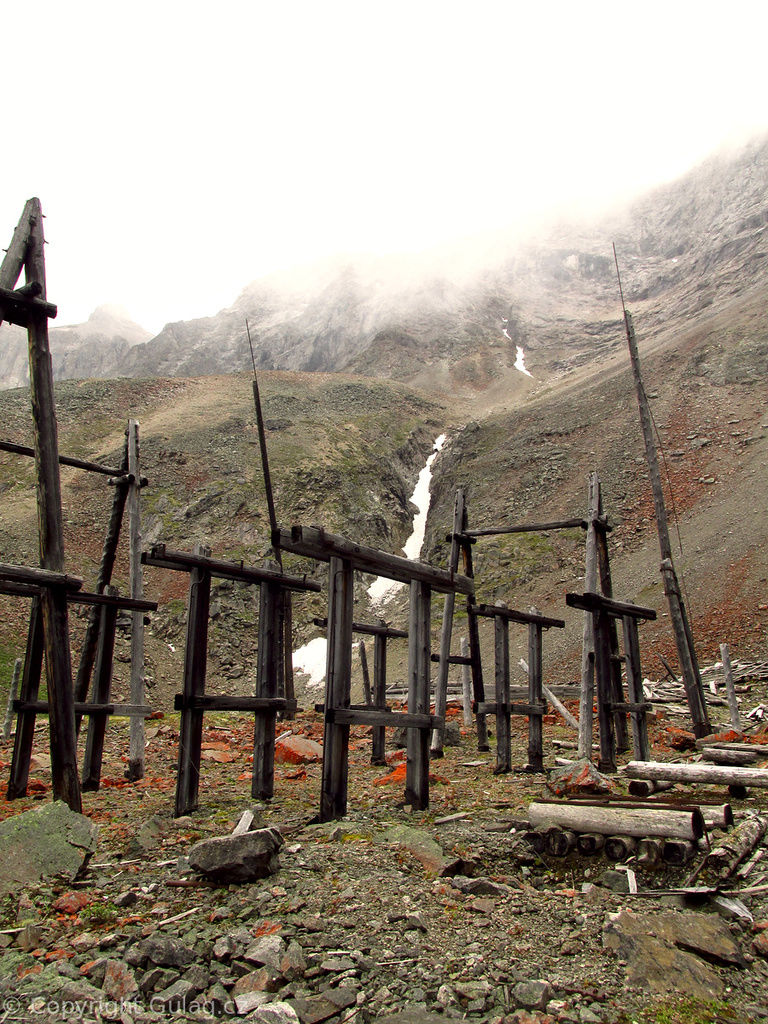 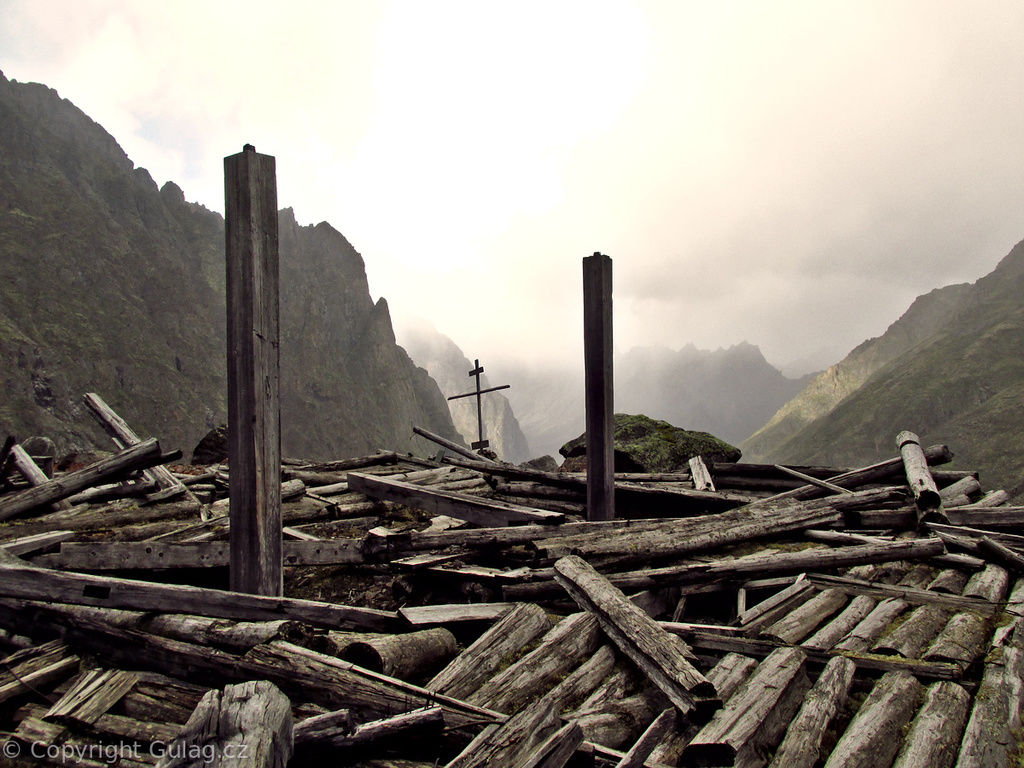 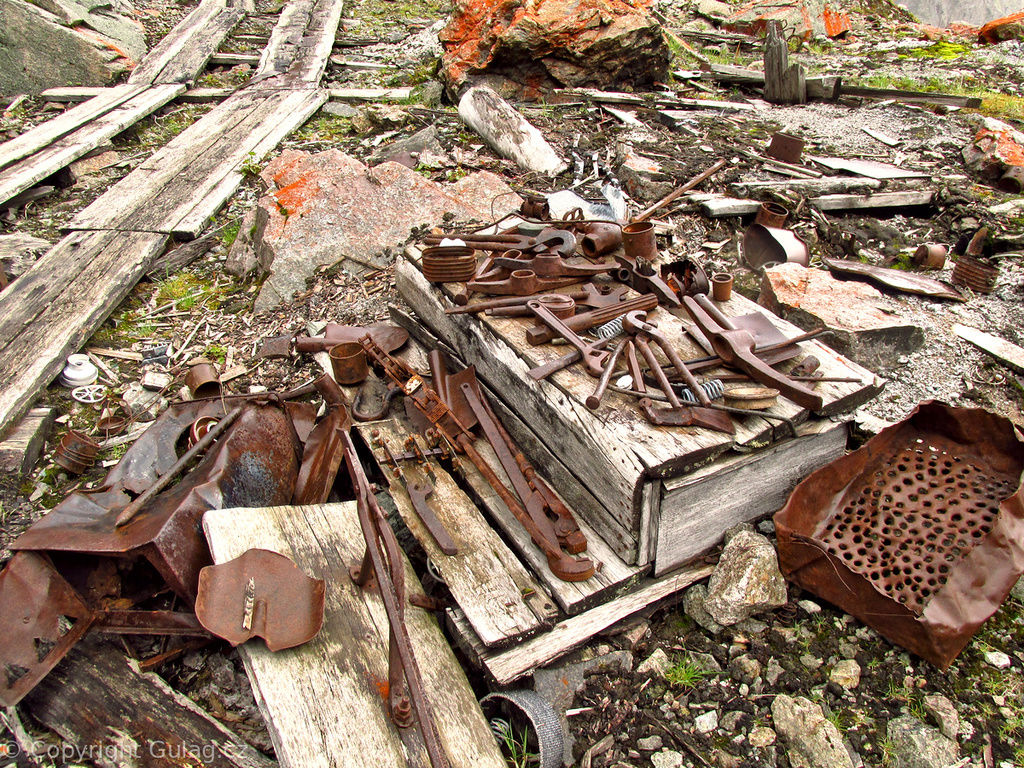 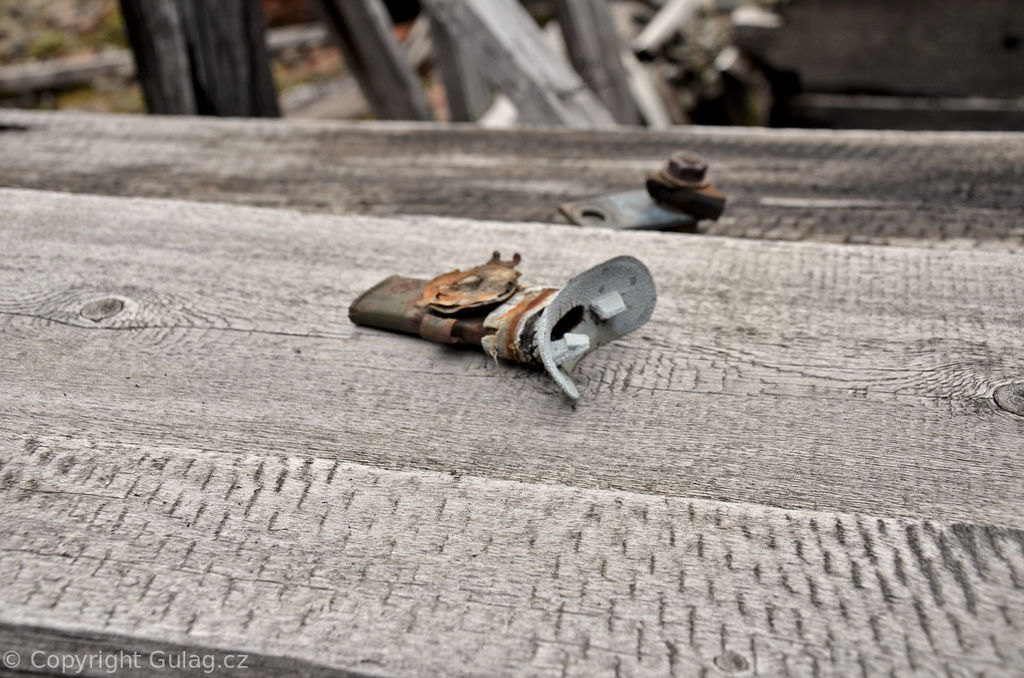 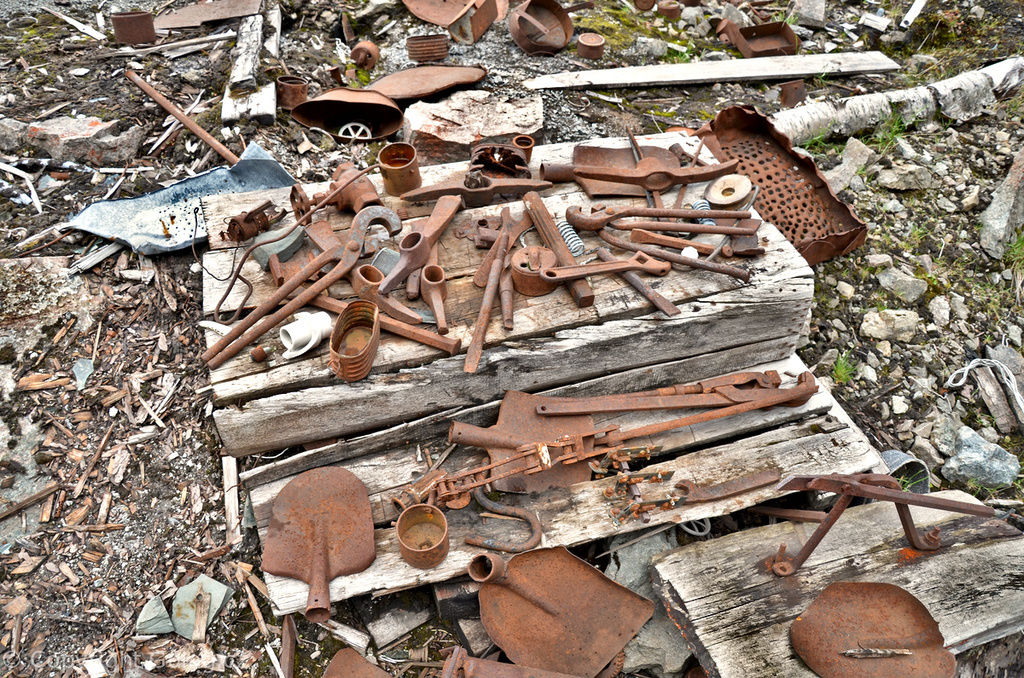 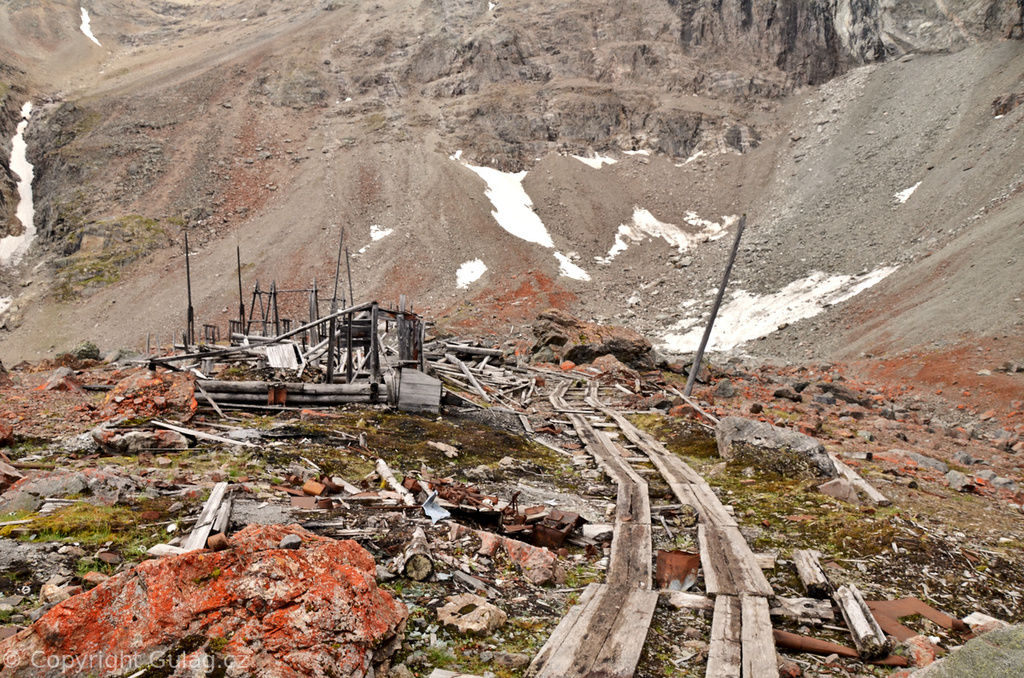 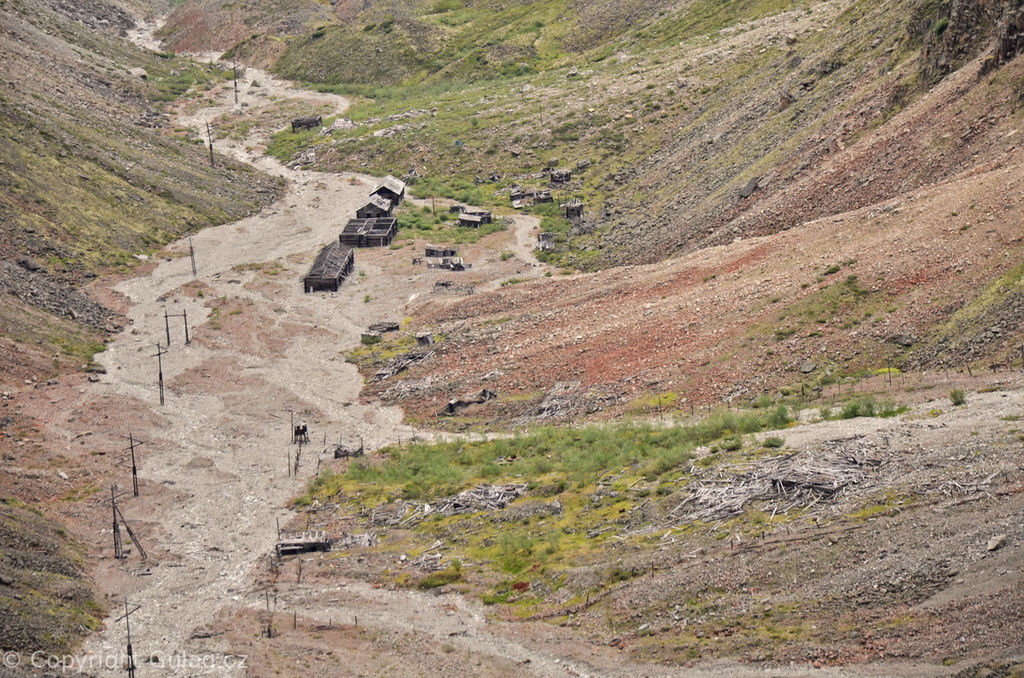 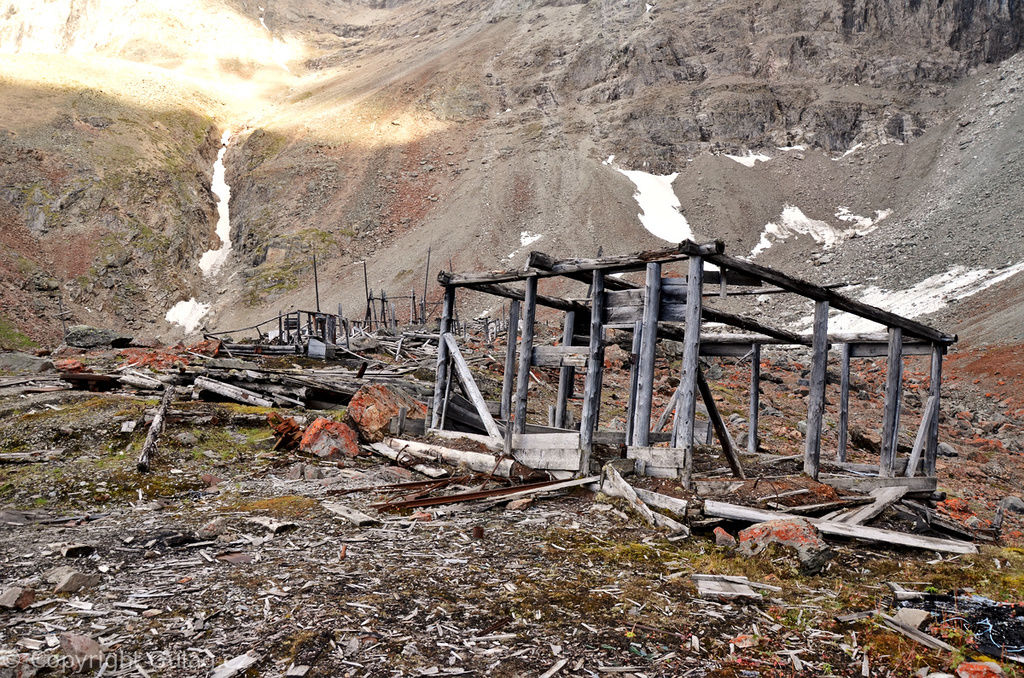 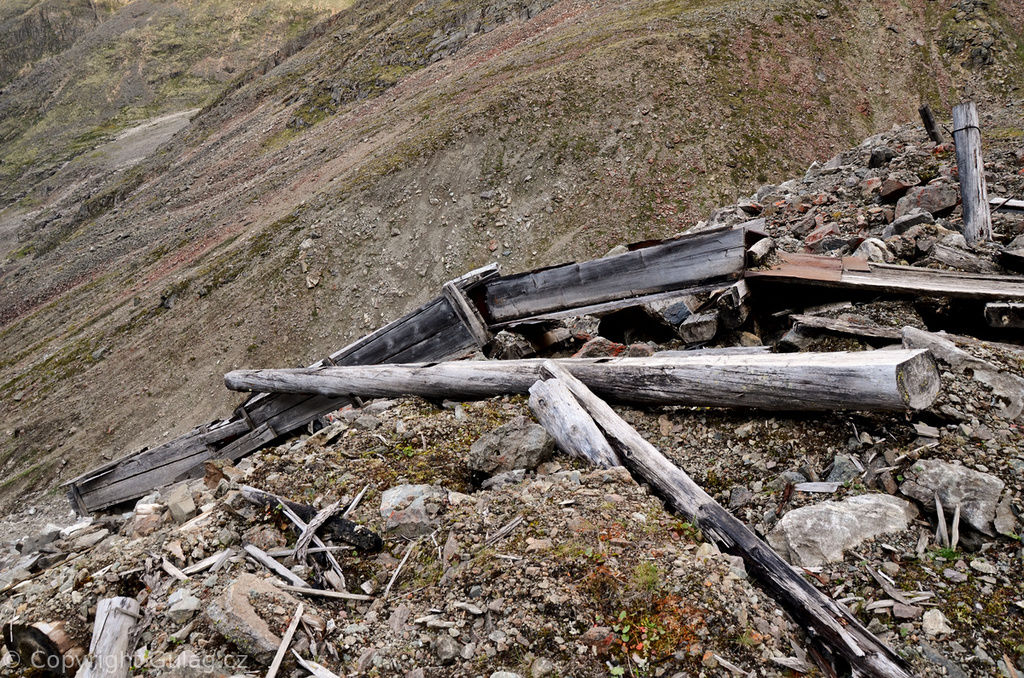 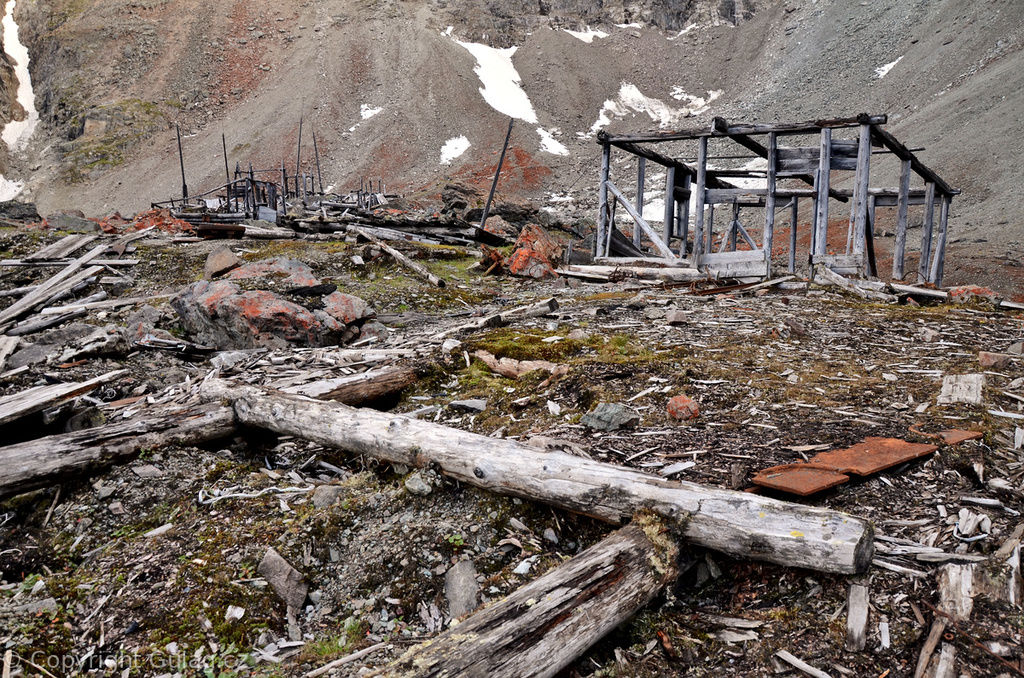 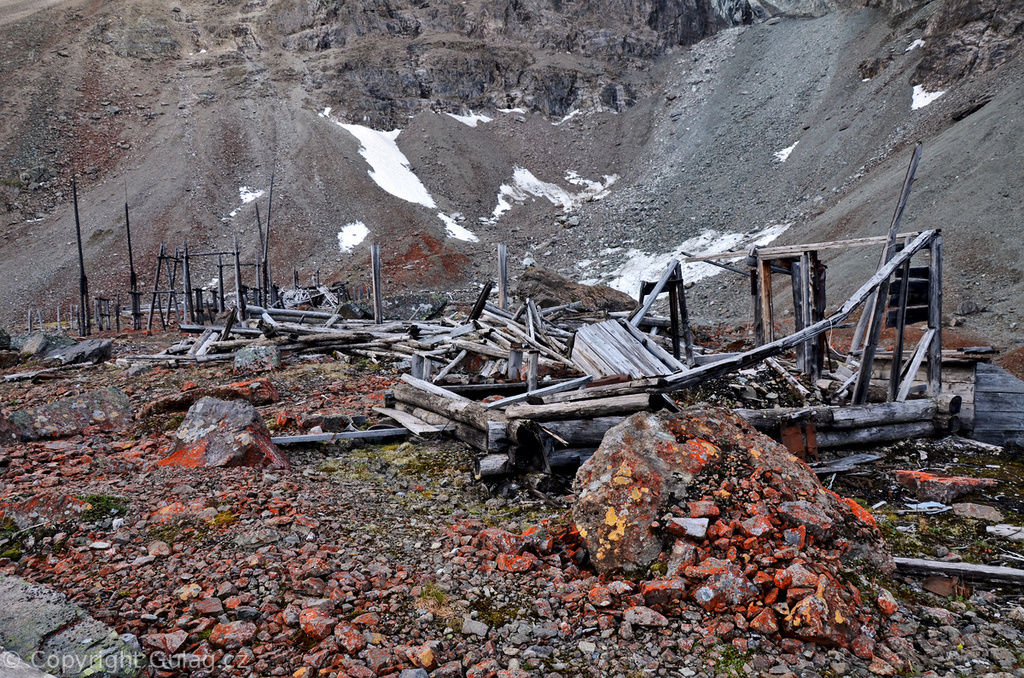 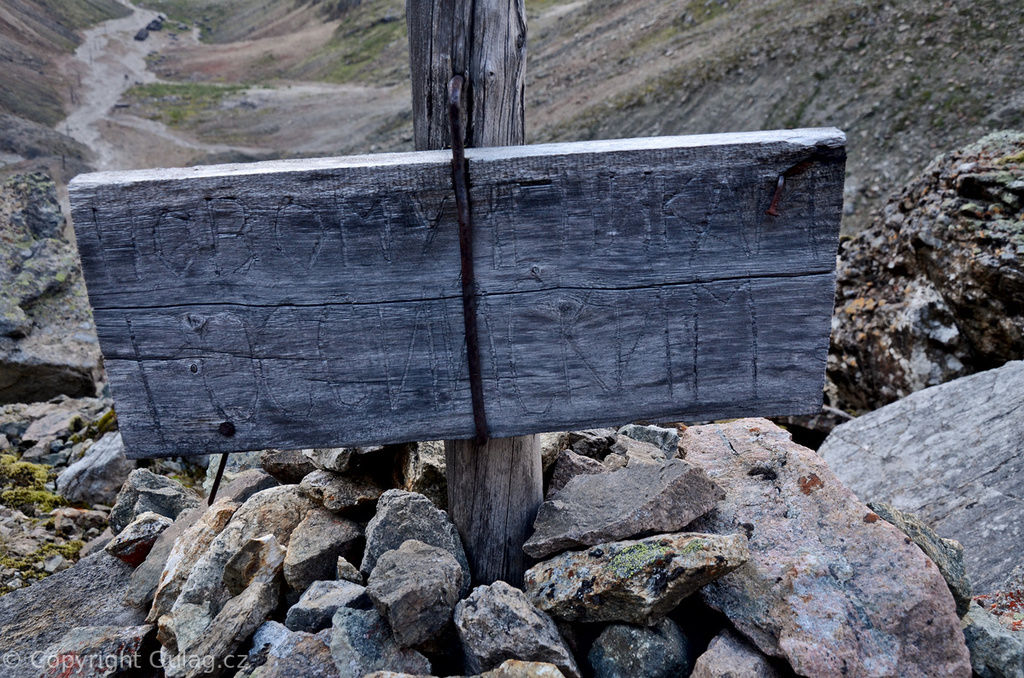 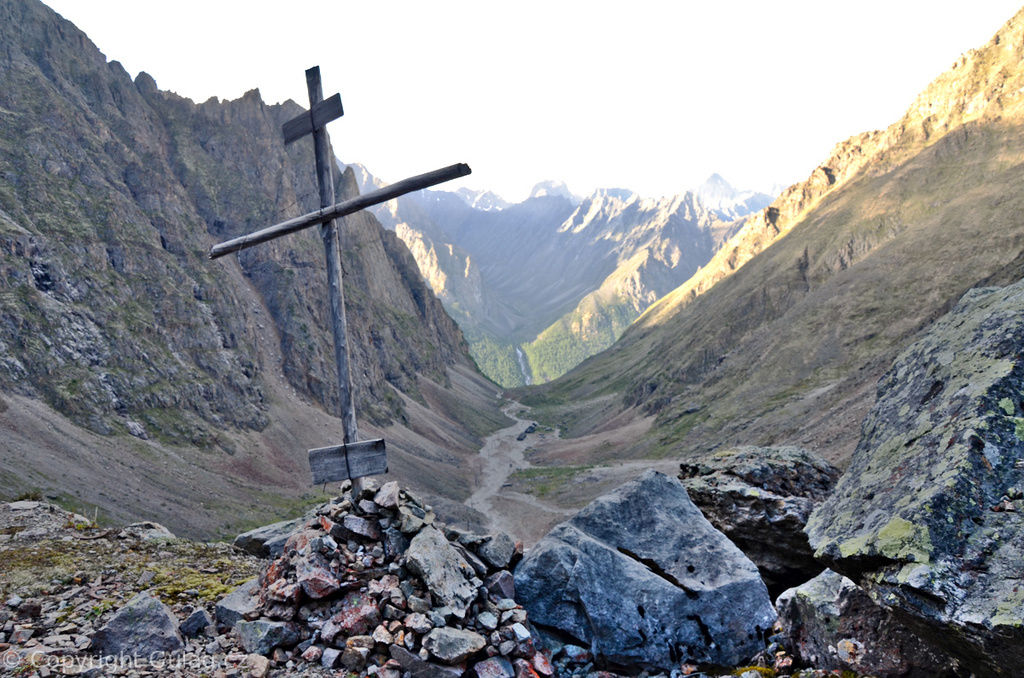